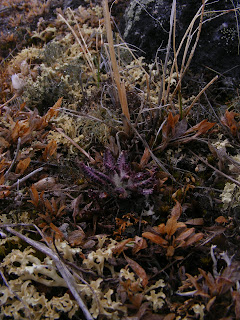 There has not been much progress in the way of finding new plant species, or new species flowering. But many more leaves have come up as the snow melts and many plants have swelling buds. I feel like in a few days time there is going to be an explosion of flowering. Still I am in constant amazement at some of the plants we come across. On the left is a Pedicularis or Loosewart, that has given us considerable trouble to identify. On the right is the cutest Draba I have ever seen. I new that Arctic plants were small, but this plant barely looks like anything compared to the tip of my pencil. It's even got buds on it! 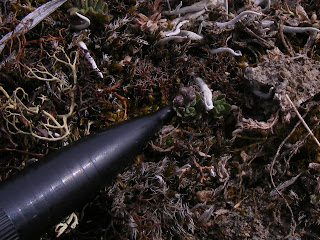 I've received word from Zoe that she has arrived safely at Lake Hazen. She says the snow is almost gone and that she has already identified 18 species we are interested in. Now Orla has joined the plant hunting team. Other than being great at making cakes and being one of the most generous people I know, she has a knack for finding new species and has been great at showing me around, since she has lived in Iqaluit for many years. Here is Orla with some of the cutest little rolly polly Husky pups I have ever seen. They were the perfect thing to run into after a long days work. 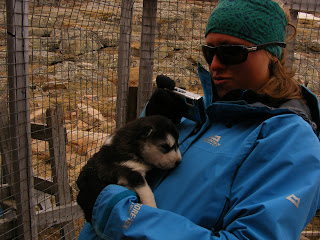 Here is a photo of one of my favorite lunch spots. It's in an old shipwrecked boat on Apex beech. It's a perfect place to get out of the cold wind. 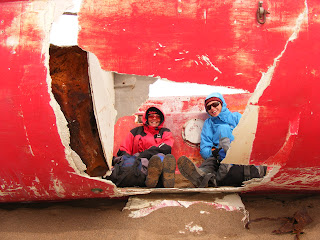 Though I have yet to reach my goal of encountering the much fabled creature, the lemming, I have been fortunate enough to come across it's excrement... 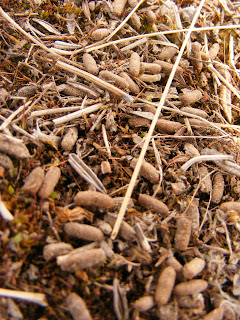