The Trials of Being a Botanist 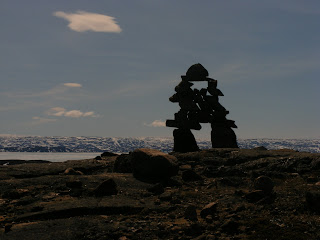 Not to demean the wonders we are seeing nor how much I love my job, but while hunting for plants can be exciting and rewarding, it also has its difficulties. Probably most troublesome is the weather. The wind spends most days attempting to flatten you. It has been a reasonable temperature of late, but with windchill it still feels like winter. There was one day where I felt like my cheeks were being blown back as if I was a dog with my head out the car window. The wind grabbed some pages out of my notebook and whipped them away into the nearest pond before we could scramble after most of them. On most days I couldn’t tell you whether I’m too cold or too hot, but it’s definitely not in between. I get sweaty from the exertion of hiking around, but the surface of my skin is numb and sore from the endless wind pulling the heat away, and the occasional pelting by sleet.
There was one glorious day without wind nor cloud on July 1st. New flowers were popping up left right and center. It was hard to keep moving rather than laze about in the sun. Then They came; floating effortlessly on the breezeless day, alive with the warmth and thirsty. By lunchtime we were back in our layers to shield us from the bloodthirsty rather than from the cold, and there I was swatting away with 3 bites flourishing on my forehead.
Worst of all perhaps are days like today, where I wake up to this...
﻿﻿ 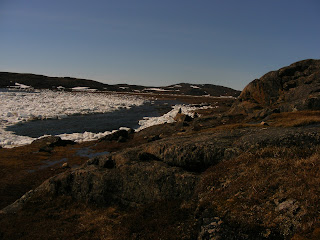 Getting over the tundra can also be troublesome. When we first got here there were banks of snow between us and the snowless ridges with our exposed subjects. Some of the banks were taller than I am. These could be trying to get over. One moment you would be doing fine and the next your entire leg was swallowed by snow. When going downhill, it was often easier to just slide down on our bums. And, when down was not the way to go, we sometimes resorted to rolling over the snow which involved a lot less sinking then putting all our pressure on one foot. In one instance, my leg ended up in a river under the snow and came back out without a boot. Several minutes and wet mittens later I had a boot full of ice cold water back on my foot and we called it a day. As the snow melted it became easier to explore new places, though it was more difficult to find the same sites again because the landscape underneath the snow was unrecognizable, and it was not easy to return home without feet sopping wet from the streams of snow melt. Bare tundra is not any easier to walk over when it's something you are doing for hours every day. Tundra is really hills of boulder jutting out and every angle with a sprinkle of spongy plants. I’ve rolled my ankles more times than I can count.
Really, my mind glances off these difficulties, barely taking notice, because it’s so busy taking in all of this. 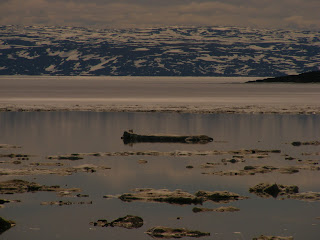